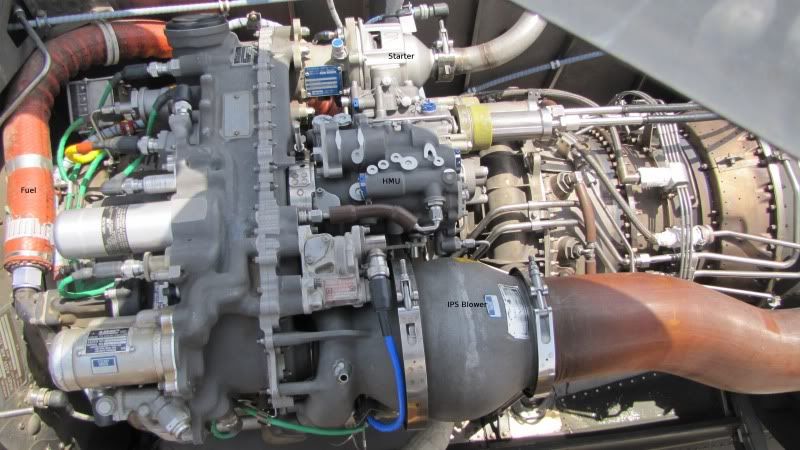 As seems to be typical with Kitty Hawk kits, this came with a rendition of the two GE T-700 turbo-shaft engines. The T-700 is the workhorse of the United States military helicopter fleet being found in everything from the Blackhawk, to the Viper, Apache and others. As such, I thought it would be an interesting challenge to see what I could do with the kit engines. And, as my vision for this project was for her to be displayed as she would have been early in the morning of 3 October 1993, an open engine compartment is a reasonable configuration as the crew could have been pre-flighting the bird to prepare for any potential mission of the day.

The engine is essentially two rather ill fitting halves with plugs that go on both ends for the compressor face or exhaust detail, and some plumbing. It fits securely into a very complicated engine nacelle assembly that requires a great deal of test fitting and patience to get aligned properly (this is not including the insane assembly for the transmissions, rotor hub and intakes that will be addressed later). When together, it’s a pretty impressive sub assembly straight out of the box. But, to do this right was going to take a great deal of plumbing to get anywhere close to satisfying an inspection on the judges’ table. So, I scoured my references and the internet for pictures of the number 1 engine in situ.

One of the better references was actually this video of a pre-flight inspection on a Blackhawk.

Pausing that at key points will allow you to see about any of the wiring and plumbing that you could want to add for whatever of realism you are wanting to build to.

Once I had a enough references and a plan in mind, I broke out my collection of lead wire, plastic rod, mini-drill set, and got to work. After several sessions at the bench I had something that I felt was a decent representation of the engine and plumbing.

Next it was time to pick out the wires and other details, beginning with Mig Silver applied with a fine brush and continuing on with a citadel brass type color and Vallejo Model Color’s light rubber, red, yellow, white and custom mixed combinations of the same with Tamiya’s green and blue. Then, I cleared with Alclad’s Aquagloss in preparation for some decals and weathering.

With the color mostly down it became apparent that some detail was lacking and that some placards on the engine would add a touch of needed realism. I dug out my sets of Aeroscale cockpit placards and tried to replicate a few of the more noticeable markings that exist on the engine and plumbing.

Now it was time for some light weathering including a simple dark enamel wash on the engine and compartment to add some depth and a tiny bit of grime. I opted for light weathering on the engine and compartment as these aircraft from the 160th SOAR were famously well maintained. In fact, in Durant’s book “In the Company of Heroes” he commented how his crew treated his aircraft like a hot rod, including putting armor all on the tires between missions. I put his book in the upper echelon of aviation related books. It is probably not as good to me as Robin Olds’ “Fighter Pilot” or Dan Hampton’s “Lords of the Sky”, but it is a good read.

In any event, after a light coat of Testor’s dullcote, the engine is complete and ready for installation when the fuselage catches up to it.